Hey there, So Good Readers.  Just your friendly neighborhood Junk Food Guy here, again!  It’s the day after Cinco De Mayo, which means you are currently sitting at your work desk, recovering from margarita withdrawal (you’re not allowed to call them hangovers).  But your Mexican celebration isn’t over yet…because I have, in my hands, Limited Edition Turkey Hill Fried Ice Cream!  It’s fiesta time, boys and girls… 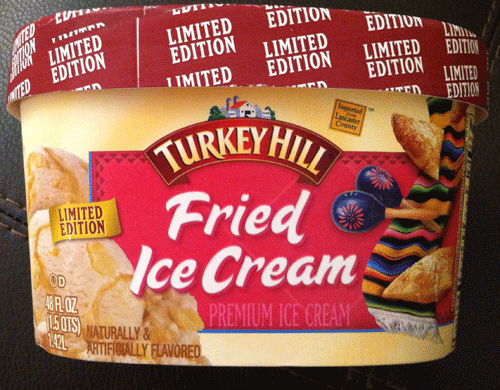 Limited Edition Turkey Hill Fried Ice Cream is comprised of “Cinnamon ice cream swirled with cinnamon sopapilla and sweet tostada pieces.”  Sounds like a plan, although what IS fried ice cream?  Turns out it is, according to Wiki, “a dessert made from a breaded scoop of ice cream that is quickly deep-fried creating a warm, crispy shell around the still-cold ice cream.” Hmmm.  I feel like I’ve had this before.  Can TH really duplicate this? Limited Edition Turkey Hill Fried Ice Cream has 160 calories per half cup of ice cream, and lots of ingredients.  When I’d had fried ice cream in the past, the whole point of the dessert was the interplay between the fried shell and the cold vanilla-ish ice cream.  So I’m going to be looking for crunchy pieces of dough in here. I scratched the surface and placed a big mouthful into my pie hole.  The cinnamon ice cream is fluffy. It doesn’t really taste intensely cinnamon-y, per se, but there is a good french vanilla flavor.  it’s sweet, creamy, and has some nice hints of cinnamon – but this isn’t ice cream that tastes like Big Red chewing gum or anything. The sopapilla swirl in this Limited Edition Turkey Hill Fried Ice Cream was confusing to me, since sopapillas themselves are a form of fried dough and sugar, sort of like a doughnut.  So when this ice cream says sopapilla swirl, its a swirl of…pureed doughnut?  With cinnamon?  And what does this have to do with fried ice cream?

The swirl tasted sort of like not-quite-sweet-caramel with cinnamon, also had a definite carb-like flavor to it, like a graham cracker.  Not bad, but definitely unusual.  The tostada pieces were far and few in between, and when I got one, it wasn’t crunchy at all.  Sort of just little pockets of cookie dough.  No real flavor – not the best.

Overall, the ice cream tasted fine, but in no way reminded me of Fried Ice Cream.  It was just a normal cinnamon-y creamy ice cream with some caramel-y ripple through it…pretty standard.    Not my favorite Turkey Hill offering, and certainly not as good as their Pumpkin Pie Ice Cream…but I can appreciate TH wanting to try and replicate other desserts.  Still, this one fell flat for me.