So Good Readers, Happy New Years Eve!  It’s your friendly neighborhood Junk Food Guy, comin’ at you from Puerto Vallarta, Mexico!  That’s right, readers, I am officially on vacation, but I ALWAYS have time to eat some chips and let you know how they were.

The end of the year always brings moments of reflection, and reminds us of things we wish we had done.  This year is no different – one thing I definitely did poorly was review things that people were gracious enough to give me!  Take these Lay’s India’s Magic Masala Potato Chips, for example – my friend Arish gave them to me after a trip to India he took, and I sat on them for months.  Now I’m ready to review them…and I saw them being sold at my local Korean grocery store!  What the… 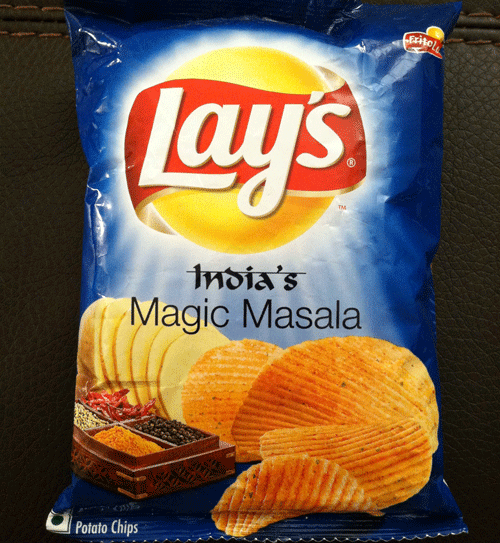 Lay’s India’s Magic Masala Potato Chips is another in a line of Indian Frito-Lay chips that are out there.  I’ve reviewed some other flavors on my blog – some good, some bad.  It’s safe to say that South Asian nations have a spicier palette than Western folk.  But would that translate to potato chips? Lay’s India’s Magic Masala Potato Chips have a funny name – magic masala instantly makes me think of Magic Mike, which is not what I normally imagine when eating greasy chips.  Plus, the box of spices on the front of this package looks more heart-burn-y than magic. Hmmmmm ….THERE’S Magic Mike! Actually, this dude appears on the package of a lot of Frito-Lay India chips, and is some super famous bollywood actor, Saif Ali Khan, who is apparently dreamy amongst the females.

Also, Frito-Lay India had/has a promotion called “Be Dillogical.” Dil, in Hindi, means Heart.  They explain the promotion to mean: “What Lay’s, with its melt in the mouth simple taste, urges you to do is stop listening to your head so much and tune into your heart instead. In other words – ‘Be a little dillogical.”

Honestly, that’s a pretty cool promo concept.  It combos both English and Hindi and has a reasonable albeit contrived meaning that can be used to sell bags of fried chips.  I like it.  Good work, Frito-Lay India! Lay’s India’s Magic Masala Potato Chips contain edible vegetable oil.  I should hope so!  Lots of other spices too – Masala is basically a word for a mixture of tasty spices.  Let’s do this. Lay’s India’s Magic Masala Potato Chips smelled like …well, to be blunt, Indian food.  Like curry spice.  Smelled good!  I love Indian food, and in the past, South Asian snacks have often been overpowering in their spice profile – too spicy to get any savory. But these actually smelled decent – I could pick up hints of chili, coriander, and cumin, for sure. I crunched some of these Lay’s India’s Magic Masala Potato Chips, and was REALLY pleased.

First, the flavors popped – as soon as I chewed, I could taste coriander, cumin, and garlic powder.  As I chewed, a nice tanginess began to emerge that I was very familiar with when it came to Indian cooking – it was the chili, the ginger, the tomato powder.  The chip sort of tasted like well-curried potatoes with a POP!  After the flavors began to blend, then came the  salty chip flavor and the slow and lingering burn…ever so slight, just to give the chip a nice finish.

All in all, I’d say these chips were a little bit of magic – probably the best Indian snack I’d ever had (so far.) Excellent work, Frito-Lay India!

PURCHASED AT: given to me by a friend, but might be available in your local ethnic food store.