The days of pulling off a successful Halloween party by blindfolding a rec room full of gullible kids, plopping peeled grapes into their grubby little mitts & telling them they’re palm deep in witch eyeballs are long gone.

Now, thanks partially to the Saw movies but mostly Martha Stewart, upping the ghoulish party ante has resulted in creepy shin digs resembling something catered by Hannibal Lecter.

Here are a few epically gross dishes being served up again this year which will ensure you leave that old school, peeled grape gag for the Amish. This pic of a tray full of  icky intestines doesn’t even show off the sickening guacamole bile baked inside. The meatloaf hand gets its signature charred skin look from broiling processed cheese laid over top the severed goodness. 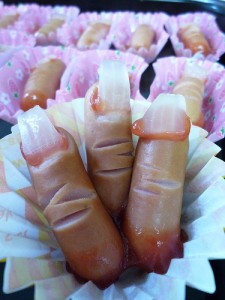 Meat Head: Find a Dollar Store novelty skull, disinfect the Hell out of it and then generously drape luncheon meat all over. Zombie Head Cheese: Again, find a suitable life size novelty skull and lather the Hell out of it with your favorite spreadable cheese. Also suitable if you are throwing a “Raiders of the Lost Arc” screening party. How skilled are you with canned meat and an airbrush? There’s no shame in saying none. These used Q-tips are super gross and easy to create using marshmallow fluff dipped in peanut butter. Chunky if you’re going for the gag factor. This Thorax cake truly blurs the line of creativity and madness. Hit up the link, this one picture doesn’t do it the gruesomely awesome justice it deserves. Oh the magic one can wield with fondant. This is what happens when you don’t leggo the Eggo. Once you rip off the BBQ ribs cage as the ham slice skeleton head looks on in horror, there’s a delicious bounty of sausage intestines within. Candy kitty poo in a litter of cereal. I always knew there was a reason I hated Grapenuts.

FInally, if you want to clinch the neighborhood award for most disturbing Halloween centerpiece, you can’t go wrong with a Cake Baby.