For many of us, candy and /or bubble-gum cigarettes offered a prepubescent run at sticking it to the “Man”.

Packs of sugared smokes sold like hotcakes at local corner stores with the sole purpose of taking sinful mock drags during Recess, while your 5th grade teacher looked on with a disapproving scowl. Most would argue that the allure of the candy cigarette was from the shits and giggles derived from participating in an act that was really only one unhealthy dose of nicotine away from the real deal. Plus, coupled with a sweet switchblade comb, you felt like the Fonz or Ponyboy from “The Outsiders”

It certainly was never about the taste. Case in point: It’s been a few years since Popeye Candy Cigarettes bowed to public outcry & PC shenanigans, forever stripping us of the thrill of tucking a pack of fake smokes into our t-shirt sleeve & pretending you were in one of those dancing gangs from West Side Story. The company responsible for pumping out the spinach chomping sailor’s smoke of choice, stopped dipping the ends of their chalky sticks into red dye and changed the name to the woefully generic Candy Sticks.  A feather in the cap for over protective Parents worrying about a gateway confectionery. The glint in Popeye’s one good eye was never the same. Similar to your dog, the day after you had him neutered.

But this was just one type of kiddie puffs available to our so very impressionable youth. Since the early 20th century, they’ve been offered in a smorgasbord of packaging & delivery systems. I particularly enjoyed the ones that came wrapped in a paper sleeve which contained a small amount of powdered sugar within, so the first time you blew into one, it imitated blowing smoke. For a kid, well, that was just awesomeness. 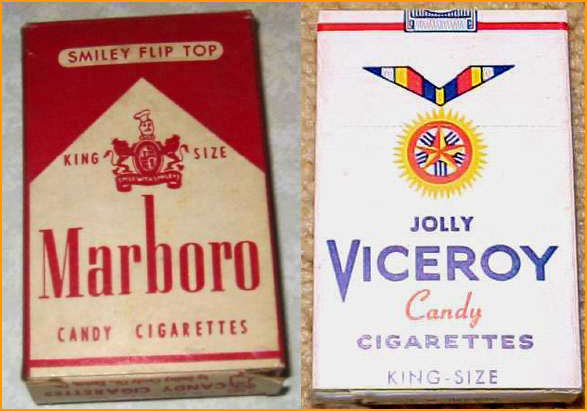 Before the FDA toyed with making the sale of candy cigarettes illegal in the United States a few years back, there were plenty of brands to tickle your fancy while eagerly perusing the penny candy racks, searching for packaging that looked closest to the real thing. If you were going to tempt fate by bringing these things home, it was go cig or go home.

But is there any real proof that links an early childhood filled with fake bubblegum menthol’s to a later, more serious, decidedly deadlier habit of smoking? I mean, I ate my weight in Garbage Can-dy during my formative years, but I have no desire nor have I developed a penchant for dumpster diving.

“A study, published in the July 2007 issue of  “Preventative Medicine” noted make-believe cigarette smoking may be considered illicit and mature by some children, but research suggests that playing with these edible “toys” cannot be considered as a benign parody of cigarette smoking. This new research is built on past research, such as focus groups in the US with 4 to 11 year-old children and a survey of 7th graders which indicated that playing with candy cigarettes may actually desensitize children to the harm of real smoking.”

Feeling the heat, major candy companies “Necco” and “World Candies” went one step further by removing the “Stick” description and just calling them “Candy” on the packaging. Certainly the controversy revolving around a product the looks so similar to the real deal will never go away, regardless of how you market it. If it looks like a duck and smokes like a duck. Even this week, a well loved candy shop in New Zealand pulled their entire stock of Candy Sticks , due to public outcry of selling something that, although not labelled as cigarettes, appeared too close for the general public’s comfort. *They were imported from the U.S. BTW.

When it comes to this purported transition from candy to lung cancer, perhaps we don’t give kids enough credit or we as weak willed consumers in an addiction filled world just need a good scapegoat from time to time.

The battle rages on.