Here’s the e-card I came up with on someecards.com after eating entirely too much food at Taco Bell recently: 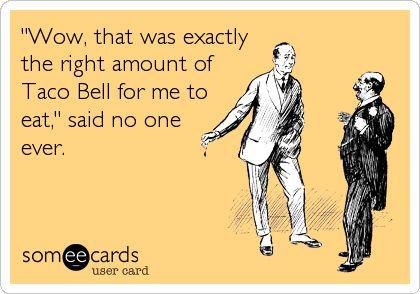 I’m talking like five items. My meal probably consisted of 2 times the recommended daily intake of fat, sodium, cholesterol, carbs, etc. It was also infinitely more than the recommended life-long intake of Taco Bell, because let’s face it, if that was a real thing, it would be exactly zero. In a perfect world we would all eat zero Taco Bells in our life. However, it’s not a perfect world, and we’re not perfect people, so every once in a while at 1 AM, Taco Bell sounds like a great idea.

Time after time, we order a Cheesy Gordita Crunch, Fiesta potatoes, and a Chalupa, which is free because everyone in the Rose Garden gets a Chalupa coupon when the Blazers score 100 points, and God knows we all have at least 17 of those in various drawers and coat pockets, some of them probably dating back to the glory days of Arvydas Sabonis and Bonzi Wells. And time after time, our stomachs become upset because they just can’t handle the greatness of Fourthmeal, and because of Game 7 of the 2000 Western Conference Finals. Yet some time the following month, without fail, we get the late night munchies once again, put on our Rasheed Wallace jersey and Can I Get A Headband? CD, and drive to Taco Bell as a single tear runs down our collective face, all the while cursing Shaq, Kobe, Robert Horry, and that greasy, smug son-of-a-bitch Rick Fox. And we never learn, do we? That’s exactly the way the ghost of Glenn Bell wants it. He wants us to become addicted to these pseudo-Mexican cholesterol cocktails, and stuff as many Doritos Locos Tacos as possible into our gluttonous gullets. Personally, I refuse to eat Doritos Locos Tacos until they come out with Cool Ranch flavor. Once that happens I’m preemptively having a foot amputated due to future diabeetus from eating those on the reg. By the way, the fact that Glenn Bell lived to be 86 is a goddamned miracle. Either that or he never ate his own tacos.

Anywho, the reason we’ve gathered here today is that Taco Bell recently added a couple of dessert items to the menu: the Churro and the Cookie Sandwich. The only desserts I’ve ever known from the Bell are the Caramel Apple Empanada and Cinnamon Twists. The empanada is a delectable concoction of fried dough filled with caramel and apples. Cinnamon twists are baked, crunchy, cinnamon things. I’m actually not sure what they’re made of, come to think of it. I also have very vague memories of a time they had Choco Tacos, a delicious frozen treat similar to an ice cream Drumstick, but in taco form. Those can be found in the freezer section of many grocery stores, but it was still cool to get them at Taco Bell. As for the two new offerings, I was intrigued when I heard about them, albeit for very different reasons. The churro piqued my interest because churros are fucking magical sticks of fried dough covered in cinnamon sugar. My first memory of churros is eating them at food carts at Disneyland when I was nine.

The Cookie Sandwich, on the other hand, struck me as weird. Despite frequent derision of Taco Bell’s food for not really being Mexican, their grub is Mexican at least in name and theory, if not in execution. With this creation, however, no attempt was made to pretend even for a second that it was Mexican in any way. Furthermore, a layer of icing between two chocolate chip cookies is unusual. At any rate, I definitely wanted to get my hands on these new desserts. I had read that they were 99 cents a pop, but as with most fast-food joints in my area they took advantage of that pesky “at participating locations” line that always shows up in the fine print. The churro was $.99 as promised, but the cookie sandwich was $1.39. I also picked up an empanada ($.99) for good measure and in case the other two were unsatisfying. I began with the one I was least sure about, the cookie sandwich. It wasn’t as small as I had expected. As you can see, it’s triangular, for unknown reasons. I licked the creme filling, and it was cloyingly sweet. It’s like icing/frosting, but with a much worse texture. It has no real flavor other than pure sugar. The cookie part was actually not that bad and was plenty chocolate-y. The filling, however, managed to ruin the whole thing, which I did not finish. Suggestions for improving the cookie sandwich: scrap the filling and just make it a cookie, OR, and here’s my favorite, replace the filling with ice cream. Boom. Mind=blown. This confectionery disaster gets 3/10. Next I went for the empanada because its crispy, fried exterior was taunting me through the plastic peephole in its sleeve. As I took a bite the warm, gooey filling oozed out, a product of the sweet, sweet love it made to my mouth. It’s like apple pie, but better because it has caramel and it’s fried. The empanada more than made up for the shortcomings of its new counterpart, and I give it 8/10.

Finally, I dove into the churro with very high hopes. As you can see, it is roughly the same length as a Dixon Ticonderoga No. 2 pencil, which is clearly the greatest pencil ever made, and all other pencils can get lead poisoning and die for all I care. I don’t know how many inches that is because I measure not with rulers, but with household items. Anyway, this churro was surprisingly fantastic. I was half-expecting Taco Bell to botch it, which would be difficult with such a simple treat. But they did whatever the opposite of botching is. The exterior was a little crunchy, and the interior was tremendously fluffy and very doughy, just right on both counts. The cinnamon sugar dusting was sufficient, but there could have been a little more. Overall it was awesome and I will eat one or two of these every time I visit Taco Bell for the duration of their tenure on the menu. This masterpiece deserves 9/10.

So there you have it. The churro is awesome and you should eat many of them, while the cookie sandwich blows and you should never eat it. I beg Taco Bell to get rid of the creme filling because it’s real bad ‘n stuff. O’Doyle rules!